We're Open and We Have Bikes In Stock!

Bicycle Habitat was founded in New York City in 1978. We have expanded into several storefronts in Soho, but always maintaining our original location on Lafayette Street. In 2010, we also expanded into Park Slope, Brooklyn. Through all these years, our mission stays the same: More people on bikes, more often. We believe all of us on bikes is better for health, for the city, for the environment - and for quality of life.

Here's a brief history of our story.

Charlie McCorkell is founder and current owner of Bicycle Habitat. He and Hal Ruzal opened the store in 1978. But they didn't always know each other.

Charlie McCorkell developed a passion for bicycling in the winter of 1969, when he started his college commute from his parent's apartment in Windsor Terrace, Brooklyn, to his school, Cooper Union, in the East Village.

January is an unusual time to start riding a bike. But an intense dislike for the confines of the subway - and coinciding encouragement from fellow classmate (and future founder of Performance Cycles Product), Francis Bollag - ignited a sense of freedom. Charlie's inspiration to go by bike in NYC had been ignited. He hardly ever took the train again.

After graduating from Cooper Union, Charlie worked as a civil engineer specializing in tunnel construction. He successfully supervised work on the Metro in Washington, D.C., Manhattan's West Side sewers, the ill-fated NYC water tunnel #3, and the construction of the Lexington Ave 62nd street subway station. By the age of 26, he had acquired his professional engineering license, but also become disenchanted with his career path and began to seek other opportunities.

When the Executive Director position became available at NYC's fledgling advocacy organization Transportation Alternatives (TA), he leapt at it. And loved it.

It was Esta, Charlie's wife, who saw partnership in its two founders. While Charlie was the executive director of TA, the TA inner circle would meet regularly in Charlie's living room in Chelsea.

After one such meeting in November of '77, everyone was gone but one of the group's volunteers, a local New Yorker from south Brooklyn, Hal Ruzal. Charlie briefly left the room, and by the time he returned, Esta was introducing him to his new business partner - Hal.

Esta had remembered and acted on a conversation she and Charlie had months earlier; they were talking about the future, particularly Charlie's lack of long-term enthusiasm for civil engineering. He had mentioned that he he'd like to open a bike store and make avocation a vocation. In such conversations are the courses of lives made!

Three months later the lease was signed at 244 Lafayette, and under $5,000 in merchandise was purchased and an opening party was planned.

The question was: How would Bicycle Habitat be different from other stores and what could we be best at? The answer: Promote bike advocacy and support our loyal customers. It's about time that a shop make bikes accessible by offering test rides. And the concept of a repair area in a fishbowl was born- what we do as mechanics should not be hidden from view.  We'll offer repair classes. The people-centered thinking took off.

Sticking up for the cyclist:

Back to our roots, briefly. The 1970's were one of the most raucous times in NYC cycling advocacy history, and Charlie had the honor of commanding some of its front lines. While at TA, Charlie was  organizing protests numbering 10,000+ cyclists. He'd helped found the New York Department of Transportation's Bicycle Advisory Council, led a number of civil disobedience events, such as painting bike lanes on Manhattan streets, and illegal rides over the Queensboro and Manhattan Bridges. He even organized a small group of twelve cyclists to the Brooklyn Bridge in protest of the bridge's redesign to eliminate bike access and force stair access usage during its reconstruction. All twelve were arrested.

Slowly, the protests yielded change: Some of the gains made by cyclists under Charlie's leadership included an agreement to build a bike path on the Manhattan Bridge, the elimination of the seven sets of stairs at the Brooklyn Bridge, and the construction of the Queensboro bike path. Streets evolved to accommodate bikes: An emergence of painted bike lanes on city streets, the elimination of parallel sewer grate design on Flatbush Avenue, and an agreement with the city end purchase of the â€œbike killer" grates. (Grates that caught and trapped bicycle wheels.) Parks evolved, too: The implementation of the bicycle/jogging lanes on both the Prospect Park and Central Park roadways, and improved availability of bike racks for buildings. Whew! High fives all around for TA!

Change wasn't going to arrive without challenge. Fast-forward a bit: It's the 1980s. And towards the end of the decade, the Ed Koch Administration had reversed some trends and actually banned cyclists from 5th, Madison and Park Avenues from 34th to 59th Streets.

Bicycle Habitat supported the outcry - it raised the money for a formal, legislative challenge and at the same time paid active members of the bike messenger community to organize a messenger-wide strike against the ban. With the help of Habitat, the streets were once again opened to all.

Looking back from the 21st century, it's hard to believe from the bike lane of our smoothly paved roads, that in just the '70s and '80s there was no bike access on the Queensboro Bridge or the Manhattan Bridges, and that cyclists had to deal with seven sets of stairs on the Brooklyn Bridge. New York had no on-street bike lanes and a bike route along the West Side Highway was just a dream. Cars dominated the city's park roads; the only limited car-free hours were during the day on Saturdays and Sundays. Cycling lanes in the parks did not exist. Bikes were banned from subways and commuter trains. Charlie and Bicycle Habitat have been an integral part of these changes.

Bicycle Habitat - 244 Lafayette St It was always fun but rarely easy to run a store in New York City. After opening in 1978, the reaction was good, and the shop broke even in the first year. Still, it was obvious that Lafayette Street was not going to be a hub of bicycle life.

Unlike the SoHo of today, with stores, salons and restaurants from corner to corner, at the time, Bicycle Habitat was one of only two retail stores on the block. The street was awash with junkies going to and from the methadone clinic; the buildings were fairly empty, the manufacturing was leaving, and the â€œwhite plight" had gripped the city. Urban planners had predicted a future where the city was a job center and the residents were the poor who could not afford the suburbs - ooooh, were they wrong!  Bicycle Habitat was part of the new wave that would remake SoHo.

By the middle of 1979, it was obvious that the Lafayette Street store would not provide the financial security necessary to keep business flourishing.  In attempts to broaden their clientele, Hal and Charlie turned to Debby Sauer (now married to Frances Bollag), another TA volunteer, and opened a second store in Chelsea at 21st St. and 7th Ave.  For a while, it was easy going, but like many fantasies, obstacles eventually arise.  By 1982, things were changing - chlidren were being born and safety and mugging was a major concern.

Finally, Hal and Debby decided to sell their shares of the business to Charlie, with Hal remaining in the business but without the pressures of managing planning. With loans from friends, a vision for the future, and a few spectacular employees, Bicycle Habitat survived and thrived.

Cycling took a turn in the late '80s, and Bicycle Habitat was not immune. With the stock market crash of 1988, Trek Bicycles was on the edge and slipping. Bike shops were closing all over the place, and Bicycle Habitat too was failing. Rent and tax payments were missed; both the IRS and New York Sales Tax regulators were moving towards putting locks on the doors. The only chance was a radical surgery - one of the two shops had to go. Hard lessons were learned about cash flow, trust, and making a profit.   In 1992, the Chelsea store was closed with the decision to return all attention to Lafayette Street and rebuild.

In 1993, Transportation Alternatives was also on the verge of disappearing. Bicycle Habitat, along with a few others, was asked to make substantial contributions to help TA stay afloat. In the face of his own struggling business, Charlie had a hard decision, but decided that saving the shop without Transporation Alternatives was not an option. Bicycle Habitat made the contribution and both survived and thrived

Despite the inevitable challenges along the way, Bicycle Habitat had a unique and collaborative business that from the beginning established it in good habits and relationships. With a few minor setbacks, Bicycle Habitat has continued to grow and prosper since opening in 1978, sticking to the same vision as its opening: A commitment to people, cycling and the NYC community.

Growing into a bike-friendly city:

Bicycle Habitat - 250 Lafayette StIn the 1990s, Bicycle Habitat had established its presence in New York City. The neighborhood, like the world, was changing.

In 1995, Bicycle Habitat created one of the first bicycle shop websites in the country. www.bicyclehabitat.com has been a key part of Habitat's marketing strategy ever since. The site has garnered much attention and has been cited for the breadth of product as well as its commitment to bicycling.

Bicycle Habitat continues to support and advocate for its community and for cycling.

Bike Summer 2003 was helped by a substantial grant from Bicycle Habitat; Glen Goldstein of the New York Bike Show credits Habitat with making the show a reality. Bicycle Habitat helped grow Recycle-A-Bicycle and supported Open Plans and Streetsblog in their infancy stages of advocacy and activism. Bicycle Habitat consulted with NYC over many years in planning the start of the 2012 bike share program.

Nationally, as well: Bicycle Habitat has also been involved in the national campaigns to keep the US highway trust fund money available for bike and pedestrian facilities. Bicycle Habitat attends the annual Washington DC Bike Summit, a 3-day lobbying event where Charlie McCorkell and others meet with members of Congress to discuss health and cycling priorities.

It is dedication and celebration of cycling such as this that has secured Bicycle Habitat's reputation as an award-winning bike shop. The store has been named top bike dealer by industry leaders such as BRAIN, Trek Bikes and Specialized Bicycles.

New York Magazine, The Village Voice, Bicycling Magazine named Bicycle Habitat as best bike shop. Bicycle Habitat has also received great recognition from Zagat's, The New York Times, and several local media outlets as well as blogs.  Bicycling Magazine recognized Hal Ruzal as a top wrench. Charlie McCorkell has received a citation from the NY State Assembly for his work on behalf of cyclists and has been named YaYa Bike's Dealer of the Year. (Of all the awards, the most cherished has been Habitat's Best Small Business award from the Eastern Paralyzed Veterans, for Habitat's efforts to increase the mobility of their members.)

In 2006 Bicycle Habitat expanded on Lafayette Street and doubled its retail space. In 2010, the store expanded again into 250 Lafayette Street, to open a high-end performance cycling store serving road and mountain cyclists and apparel.

In 2011, Bicycle Habitat expanded into its new location in Park Slope, Brooklyn.

2013, Bicycle Habitat expanded into its new location in Chelsea, NYC 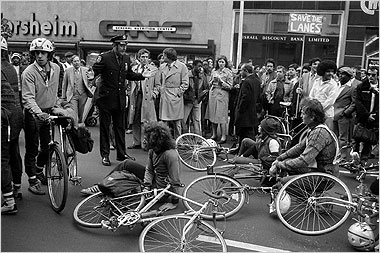 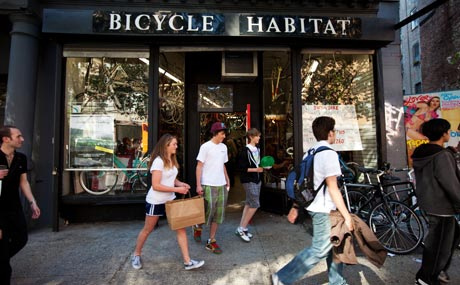 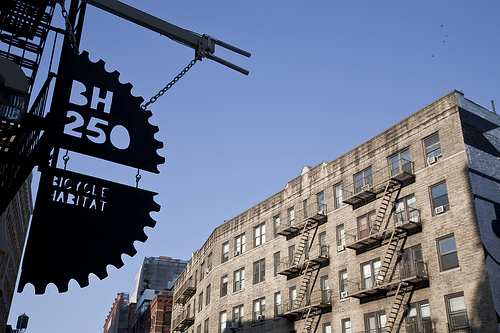