We're Open and We Have Bikes In Stock!

You know that you're a New York City Cyclist when... 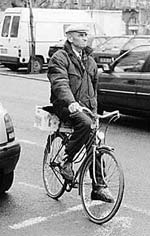 With appreciation to John Chiarella (Fixer3@AOL.com) (and others)

You carry more than two keys... for your bike, and either one of your two locks outweighs your ride.

Your response to being pinched between a parked car and a moving taxi is not to stop but rather to kick the cab in the door and fender...without dismounting.

A foot patrolman directs you to the curb for a traffic violation and you dodge right and keep pedaling.

You think that Central Park and The Greenway are "Nature"

Multi-ton cars and trucks are tearing along in front, along side and coming up behind you...Pulse rate: 66.

Can give instantaneous directions to any corner in the five boroughs, but only by using bike paths and subways.

Can't fathom the fact that Bayside to City Island is an eight minute trip but because you don't own a car and there are no bike paths over the Whitestone or Throg's Neck Bridges.

You know the exact location of every museum and tourist site in the City but never go in because it's too risky to leave the bike locked up outside.

You have attempted to use your Metro North Bike Pass as I.D.

You think that the Circle Line, The Intrepid Air, Sea & Space Museum and the Passenger Ship Terminal should be moved to West New York.

You blow through 23 red lights and stop signs every day, yet you advocate jail time for pedestrians who walk in the bike lane.

Your outfit for the weekend fits inside of a one gallon zip-lock bag.

You ride fifty miles out of the City, one way, with a twenty in your pocket and if you actually BUY something, you consider leaving the change because of the weight.

You select a restaurant because of it's charming, al fresco dining. Your bike is 23 inches away. You double lock it anyway or you can't enjoy your meal...and even then, you can't take your eyes off of it.

You consider the color of the bikes hanging from your ceiling when selecting home decor.

People look around as you go by, wondering what that crunching sound is when you walk through Gristede's

You have a $200.00 + lighting system on your bike in a city in which you can read a newspaper outdoors, anywhere, without lights, all night long.

You think nothing of walking into Barney Greengrass "The Sturgeon King" dressed in tights like a superhero.

You have a "lock-up" bike devoid of anything (you hope) someone would steal...and they steal it ANYWAY!

You favorite T shirt reads: "Blow the horn...See the finger!"

It's a beautiful Sunday in Central Park, so you intentionally DON'T go there.

Your jerseys actually have chain grease marks on the BACK (from carrying your bike upstairs to your apartment).

You buy a carbon or ti road bike -- not so you can race, but so you can drag the thing up to your fifth-floor walk-up.

You know which subway stations have ramps, escalators, stairs, and gates you can't get your bike through late at night. Still don't know the names of the major NYC highways.

All of your pants have frayed cuffs and chain grease marks.

You and your friends can recreate the scene in the first "Jaws" where Quint, Brody, and Hooper compare scars, each with an even better story behind it, except yours go something like "This is from a 1990 Buick station wagon that turned left in front of me and put me over the hood."

You turn all the way around and look out the rear window before opening a taxi door to exit.

...drafting buses, minivans, and SUVs in order to keep up with the green light wave.

You keep deoderant and baby wipes at the office....

...another cyclist asks you if you know the location of the nearest bike shop, you fix their bike on the spot.

Every time you cross the Brooklyn Bridge you see someone you know.

You bought your new Ti bike with the settlement from the "dooring".

...on Mott Street, the Chinese fruit vendor lets you stash your bike under his stand while you shop up and down the street (he's a NYC Cyclist too!)

You actually launch a club ride through Central Park in a full-on thunderstorm and driving rain...and people FOLLOW you!

You are polite to most everyone, you blush at some rap songs, but you swear like a drunken sailor when a grandma in an SUV cuts you off.

In casual conversation you can mention that you saw "Hal", "Charlie", "Clarence", "Henderson", or "Alfredo" and all your friends know who you're talking about.

You shop for your "Spring Wardrobe" not at Barney's, Brooks Brothers, or Bloomingdale's, but rather at Bicycle Habitat.

You are ALWAYS busy the first Sunday in May.

Your idea of surfing consists of drafting buses, minivans, and SUVs in order to keep up with the green wave.

You know the location of all major potholes between your home and office.

You've been asked if you're a tap dancer.

You practice track stands and bunny hops in your spare time.

You hate Times Square even more than the average New Yorker.

You own a clunker bike for those trips where you know you won't be able to bring the bike upstairs with you.

You believe you’re 're capable of predicting taxis' driving patterns.

Although you don't speak any romance languages, you're perfectly capable of pronouncing several words in Italian.

You think that historic districts would be a lot cooler if it wasn't for those damned cobblestones.

When actually driving a rented car in the city (gasp!) you stop at a red light and since no pedestrians are in the crosswalk you start to drive right through before you realize you are NOT on a bike, and slam on the brakes.

Similarly, when driving a rented car on the highway at 60 mph, you freak out at a 1" wide groove cut in the pavement -- what if your tires get stuck?

The friend who was so happy to see you on his morning drive wonders why you gave him the finger when he honked.

When someone asks for advice on buying a bike, you either:
a) ask, "How many thousands did you want to spend?"
b) assail them with so many questions about intended use, riding style and
the like -- not to mention such personal questions as pubic bone height --
that you make buying a bicycle sound like rocket science and unintentionally
put them off the idea.

When that same person reacts by saying, "It's only a bicycle," your jaw drops and your eyes bug out, and you're only half kidding.

When you encounter cobblestones, you say to yourself, "Ah, pave," and daydream about leaving the peloton in your dust as you speed through Arenberg Forest.

You keep pitching story ideas about the fascinating, absolutely fascinating, intersection of bicycling and the law to your editors at a legal newspaper, even though all your previous proposals along that line have been met with blank stares.

A car goes by with two (your preferred gender here) carrying two bikes. you can't recall their hair color or what make suv, but you can id the bikes make, model & color...

You have three bikes and you absolutely need more.

You justify your bike expenditures by the fact that you would spend even more if you had a car.

Your idea of dressing up is wearing Terry's black polo jersey.

You do more shopping in three days at the NYC Bicycle show than in the rest of the year.

You can't think of the last time you saw any of your friends who don't bike.

You sometimes wish you had a longer commute to work, just so you could ride more.

You use your helmet as a hair-styling device.